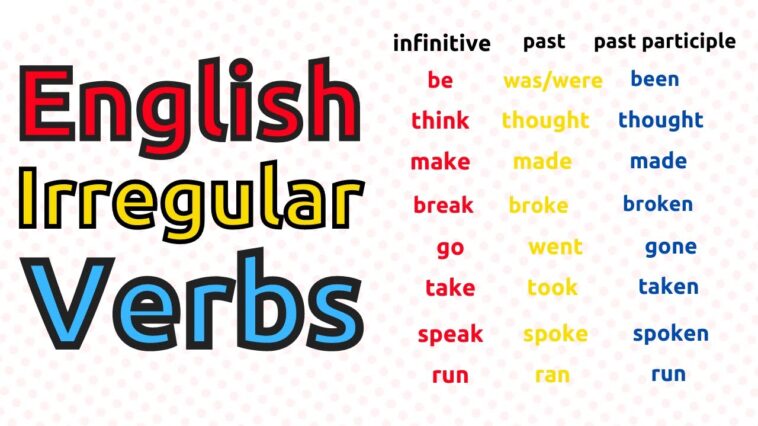 A verb is a word that expresses an action or a state of being. As you can see from that definition, there are two main categories of verbs: action verbs and state of being verbs (also known as linking verbs).

Along with nouns, verbs are the main part of a sentence or phrase, telling a story about what is taking place. In fact, without a verb, full thoughts can’t be properly conveyed, and even the simplest sentences.

We won’t be expalining to you what a verbe is an the different types or kinds of verbs here. What we are interested in are the irregualar verbs.

In grammar, tense is a category that expresses time reference. Tenses are usually manifested by the use of specific forms of verbs, particularly in their conjugation patterns.

Verbs come in different tenses. The common ones being the past, present, and future. The past is used to describe things that have already happened.

The present tense is used to describe things that are happening right now, or things that are continuous. The future tense describes things that have yet to happen (e.g., later, tomorrow, next week, next year, three years from now).

During the conjuagtion of verbs in the Simple past tense, some verbes(the majority) will always take a typical pattern whereasn a handful will not.

These two sets of verbs are termed Regular and irregular verbs respectively.

All verbs have a base form or ‘infinitive’ (for example, look, make, play). The majority of verbs, called ‘Regular verbs’, follow the same pattern and create the past simple and the past participle using the same word ending, -ed. There are, however, verbs that have different endings, and these are called ‘Irregular verbs.’

Browse Edukamer by category. Chose a category from the dropdown menu to see all category-specific posts.

Need help? We are always here and ready to assist. Ask a question and get replied in no time!

How do I whitelist website? Already Donated? Confirm membership