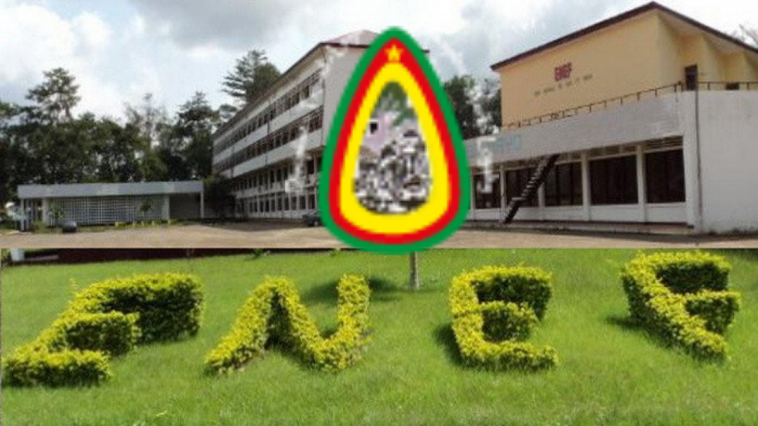 Created some 72 years ago, the National Forestry School (NFS) of Mbalmayo has undergone several name changes during its evolution. First referred to as centre d’apprentissage Forestier ( CAF ) in its creation in 1949 and having as its first Director Mr MOULE (1949 – 1952), the CAF ( Centre D’apprentissage Forestier) is situated in a part of the forest reserve of Malabo. Formerly, these lands belonged to the big MVOG-NDI family. The main mission of CAF was to train indigenous people who specialized in cartography for forest exploitation. (Photo first promotion of CAF)

In 1952, the Forestry Learning Center became Ecole Technique Forestière (Forestry Technical School) abbreviated as ETF under the leadership of Mr GUISCAFE. The ETF provides training for forestry officers. (Photos main building of ETF & one of the teachers of Forest Botany from the early ETF).

From 1952 to 1960, witnessed the creation of an arboretum extending over an area of ​​7 hectares, a school forest occupying 772 hectares with the creation of two school fish ponds. All of these resulted in the training of forest officers with the help of new pedagogies. (Photo ebony platter from the arboretum). From 1953 to 1956, the school was managed by Mr LALLEMENT then by Mr DEMO from 1956 to 1962.

Under the direction of Mr LEBRETON ( 1962 to 1968), L’ETF acquired the appellation L’EEF ( École des Eaux et forêts ) in 1966 with a new, training of technical forestry agents ( picture of the remains of the l’EEF building).

In 1968, the management of the EFE experienced changes at its head, particularly with the appointment of the first Cameroonian director in the name of Mr MBENG Gustave (1968 – 1970).

Mr KEDI Jean was the Director of the EEF from 1976 to 1978. He ensured the construction and the inauguration of the current buildings of the institution (fruits of cooperation between Cameroon and the Soviet Union). The EEF witnessed a modernised training framework (photos of the inauguration ceremony, electrical engineering room, mechanical section room, technology and wood treatment room, president Ahidjo and M. KEDI, first promotion of technicians trained in the new building and the Director who ensured the transition of the school).

From 1978 to 1983, the EFE again witnessed a change at its head with the arrival of Mr ESSAME Félix. In 1980; the EEF became ENEF (National School of Water and Forests whose primary mission is the training of junior personnel of the forest administration (Technical assistants, technician and senior technician of forestry and wildlife ). (Photo by M. ESSAME Félix who ensured the transition from EEF to ENEF).

From 1986 to 1990, the ENEF professional body was reinforced by two British aid workers. The ENEF has received a large material donation to support the forest inventory course. All these thanks to the cooperation between Great Britain and Cameroon.

Following the 1990 crisis, the ENEF stopped training foresters mainly oriented towards the public sector with the start of training for the majority of civilian foresters. ( Picture, second promotion of civil students of ENEF during the dentrometry practical works in the diospyros crassiflora platter in the arboretum).

2001: Beginning of review of teaching programs at ENEF (MEYNET reform);

From 2003 to 2010, the ENEF was directed by Mr LINJOUOM Ibrahim. This new regime witnessed a strengthening of practical work on new educational supports.

2010: Start of PDF implementation with the start of modular training

Change at the head of the ENEF

2011: The beginning of the rehabilitation of ENEF fish ponds ceded to an individual in the 1990s and abandoned thereafter. Educational supports are rehabilitated and functional.

ENEF participates for the first time in the agro-pastoral meeting in Ebolowa; participation is marked by the establishment of a presidential tree at the comice site (Director photos, photo comice agro-pastoral Ebolowa 2011)

2017: change at the head of the ENEF with the arrival of Mr MBOCK Germain.

NFS is home to more than 600 students and 5,000 alumni with a wide variety of interests, ages and backgrounds, the Institution reflects the county’s dynamic mix of population and culture.

NFS offers the kind of education needed for leadership in a rapidly changing world. With an enduring dedication to the pursuit of excellence, We offer unparalleled student experiences across a broad spectrum of academic and professional environments. Explore NFS’s extensive, world-class online learning opportunities which may be possible. The most current information about many academic programs of study at the NFS will be found on this website of the school.

The ENEF academic enterprise is organized into 3 departments.

Admission into the National Forestry School

Admission in to the National Forestry School (NFS) is done only through competitive exams organised by the Ministry Of Forestry and Wild Life for initial training and through files study for specialization training and free auditors from decentralized local authorities of private companies. Initial training is done over a period of 2 years. There are only two examination centres in Garoua and Yaounde.

The National Forestry School (NFS) is also open to young foreigners through the diplomatic representations present in Cameroon.

Once the list of new recruits is official, they can get closer to the Study and School Department for more information. Regarding the study methods and other information.