The East Region of Cameroon is the largest region among the 10 in Cameroon but has very little industrial activities and population density.

It is bordered to the east by the Central African Republic, to the south by Congo, to the north by the Adamawa Region, and to the west by the Centre and South Regions. With 109,002 km2 of territory, it is the largest region in the nation as well as the most sparsely populated. Historically, the peoples of the East have been settled in Cameroonian territory for longer than any other of the country’s many ethnic groups, the first inhabitants being the Baka (or Babinga) pygmies. 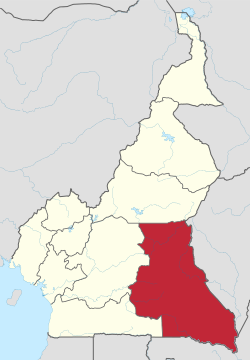 The majority of the inhabitants of the South are members of fulbe/fulani and various Bantu tribes that are collectively known as the Beti-Pahuin (Béti-Pahouin), the Fang-Beti, or simply the Fang. All of these groups speak various dialects of the Beti language. Most East Region peoples are considered Bantu in origin. The second most numerous are the various Adamawa–Ubangi tribes that inhabit much of the northern portions of the territory. Finally, the pygmies comprise another significant population.

The people of the East are predominantly Christian, and Presbyterianism and Catholicism claim the most members. Animist beliefs are also followed by much of the population, often in conjunction with Christianity. The East also has a significant percentage of Muslims, particularly in the areas closer to the Adamawa Province.