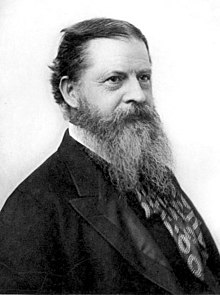 Charles Sanders Peirce (1839–1914) was the founder of American pragmatism (after about 1905 called by Peirce “pragmaticism” in order to differentiate his views from those of William James, John Dewey, and others, which were being labelled “pragmatism”), a theorist of logic, language, communication, and the general theory of signs (which was often called by Peirce “semeiotic”), an extraordinarily prolific logician (mathematical and general), and a developer of an evolutionary, psycho-physically monistic metaphysical system.

Practising geodesy and chemistry in order to earn a living, he nevertheless considered scientific philosophy, and especially logic, to be his true calling, his real vocation. In the course of his polymathic research, he wrote voluminously on an exceedingly wide range of topics, ranging from mathematics, mathematical logic, physics, geodesy, spectroscopy, and astronomy, on the one hand (that of mathematics and the physical sciences), to psychology, anthropology, history, and economics, on the other (that of the humanities and the social sciences).

Charles Sanders Peirce was born on September 10, 1839, in Cambridge, Massachusetts, and he died on April 19, 1914, in Milford, Pennsylvania. His writings extend from about 1857 until near his death, a period of approximately 57 years. His published works run to about 12,000 printed pages and his known unpublished manuscripts run to about 80,000 handwritten pages. The topics on which he wrote have an immense range, from mathematics and the physical sciences at one extreme, to economics, psychology, and other social sciences at the other extreme.

Peirce’s father Benjamin Peirce was a Professor of Mathematics at Harvard University and was one of the founders of, and for a while a director of, the U. S. Coast and Geodetic Survey as well as one of the founders of the Smithsonian Institution. The department of mathematics at Harvard was essentially built by Benjamin. From his father, Charles Sanders Peirce received most of the substance of his early education as well as a good deal of intellectual encouragement and stimulation. Benjamin’s didactic technique mostly took the form of setting interesting problems for his son and checking Charles’s solutions to them. In this challenging instructional atmosphere, Charles acquired his lifelong habit of thinking through philosophical and scientific problems entirely on his own. This habit, perhaps, is to be attributed to Charles Peirce’s considerable originality.

Peirce graduated from Harvard in 1859 and received a bachelor of science degree in chemistry in 1863, graduating summa cum laude. Except for his remarkable marks in chemistry, Peirce was a poor student, typically in the bottom third of his class. Obviously, the standard curriculum bored him, so he mostly avoided doing seriously its required work. For thirty-two years, from 1859 until the last day of 1891, he was employed by the U. S. Coast and Geodetic Survey, mainly surveying and carrying out geodetic investigations. Some of this work Peirce undertook simply to finance his diurnal existence (and that of his first wife Melusina (Zina) Fay), while he devoted the main force of his thinking to abstract logic. Nevertheless, the geodetic tasks involved making careful measurements of the intensity of the earth’s gravitational field by means of using swinging pendulums. The pendulums that Peirce used were often of his own design. For over thirty years, then, Peirce was involved in practical and theoretical problems associated with making very accurate scientific measurements. This practical involvement in physical science was crucial in his ultimately coming to reject scientific determinism, as we shall see.

From 1879 until 1884, Peirce maintained a second job teaching logic in the Department of Mathematics at Johns Hopkins University. During that period the Department of Mathematics was headed by the famous mathematician J. J. Sylvester, whom Peirce had met earlier through his father Benjamin. This teaching period also was characterized by Peirce’s having several students who made names for themselves in their own right. Among these were Oscar Howard Mitchell, Allan Marquand, Benjamin Ives Gilman, Joseph Jastrow, Fabian Franklin, Christine Ladd (later, after having married Fabian Franklin, Christine Ladd-Franklin), Thorstein Veblen, and John Dewey. Brief commentary will be offered at the end of this essay on three of these figures: John Dewey, Oscar Howard Mitchell, and Christine Ladd. It is sometimes said that William James was also one of Peirce’s students, but this claim is erroneous: it conflates the fact of James’s being an old and a close friend of Peirce, as well as being a fellow member with Peirce in the so-called “Metaphysical Club” in Cambridge, Massachusetts, with the non-fact of James’s being a student of Peirce at Johns Hopkins University along with John Dewey and others.

Peirce’s teaching job at Johns Hopkins was suddenly terminated for reasons that are apparently connected with the fact that Peirce’s second wife (Juliette Annette Froissy, a.k.a. Juliette Annette Pourtalai) was Romani, moreover, a Roma with whom Peirce had more or less openly cohabited before marriage and before his divorce from his first wife Zina. (In fact, Peirce obtained his divorce from Zina only two days before marrying Juliette.) The Johns Hopkins position was Peirce’s only academic employment, and after losing it Peirce worked thereafter only for the U. S. Coast and Geodetic Survey (and constructing entries for the Century Dictionary) and writing book reviews for the Nation. The government employment came to an end on the last day of 1891, ultimately because of funding objections to pure research (and perhaps also to Peirce’s extravagant spending and to his procrastination in finishing his required reports) that were generated in an ever-practical-minded Congress. Thereafter, Peirce often lived on the edge of penury, eking out a living doing intellectual odd jobs (such as translating or writing occasional pieces) and carrying out consulting work (mainly in chemical engineering and analysis). For the remainder of his life, except for money inherited from his mother and aunt, Peirce was often in dire financial straits; sometimes he managed to survive only because of the overt or covert charity of relatives or friends, for example, that of his old friend William James.

In his youth, Peirce was amazingly precocious, and he began to study logic seriously at an extraordinarily early age. According to noted Peirce scholar Max Fisch in his“Introduction” to Volume 1 of The Writings of Charles S. Peirce: A Chronological Edition, p. xviii, Peirce’s introduction to and first immersion in the study of logic came in 1851 within a week or two of his turning 12 years of age. Remembering the occasion in 1910, in his “Note on the Doctrine of Chances,” in Collected Papers of Charles S. Peirce, Volume II, Section 408 (hereinafter such Collected Papers references will be cited as CP, 2.408), Peirce himself remembered the crucial event as having occurred in 1852 when he was 13 years old. Regardless of his exact age, at the time of the event Charles encountered and then over a period of at most a few days studied and absorbed a standard textbook of the time on logic by Bishop Richard Whately. Having become fascinated by logic, he began to think of all issues as problems in logic. During his freshman year at college (Harvard), in 1855, when he was 16 years old, he and a friend began the private study of philosophy in general, starting with Schiller’s Letters on the Aesthetic Education of Man and continuing with Kant’s Critique of Pure Reason. Schiller’s distinction among the three basic human drives of Stofftrieb, Formtrieb, and Spieltrieb Peirce was never forgotten or renounced, and it became the basis for Peirce’s distinction between the man of practical affairs, the man of scientific activity, and the man of aesthetic practice. By Kant, Peirce was initially more or less repelled. After three years of intense study of Kant, Peirce concluded that Kant’s system was vitiated by what he called its “puerile logic,” and at about the age of 19, he formed the fixed intention of devoting his life to the study of and to research in logic. It was, however, impossible at that time, as indeed Peirce’s father Benjamin informed him, to earn a living as a research logician; and Peirce described himself at the time of his graduation from Harvard in 1859, just short of his 20th birthday, as wondering “what I would do in life.” Within two years, however, he had more or less resolved his problem. During those two years he had worked as an Aid on the Coast Survey, in Maine and Louisiana, then had returned to Cambridge and had studied natural history and natural philosophy at Harvard. He said of himself that in 1861 he “No longer wondered what I would do in life but defined my object.” It is evident that his adoption of the profession of chemistry and his practice of geodesy allowed Charles both to support himself (and before long also his first wife Zina) and to continue to engage in research on logic. From the early 1860s until his death in 1914 his output in logic was voluminous and varied. One of his logical systems became the basis for Ernst Schroeder’s great three-volume treatise on logic, the Vorlesungen Ueber die Algebra der Logik.

Peirce, then, had early and deep disagreements with Kant’s position about logic, and he never altered his view that Kant’s view of logic was superficial: “… he [i.e. Kant] never touches this last doctrine [i.e. logic] without betraying marks of hasty, superficial study” (Collected Papers of Charles Sanders Peirce, Volume 2, Section 3; hereafter such Collected Papers references will be cited as CP, 2.3). Even worse, Peirce held, was the Logik of Hegel: Kant’s fault “… is a hundredfold more true of Hegel’s Logik … . That work cannot justly be regarded as anything more than a sketch” (CP, 2.32).

Nevertheless, Peirce continued to respect and read the first Critique throughout his life.